A strange box had arrived one day addressed to Amy and Jeff. The two were roommates who had moved in together shortly after college, but they had never gotten anything that was addressed to both of them before.

Inside the box was a button with a note. The note explained that the button had the power to swap Amy and Jeff with a random pair of bodies. It mentioned the ability to potentially swap with famous people like musicians, athletes, or actors. It could be pressed once a day. Amy and Jeff thought it was a joke. But after a night of drinking, they began talking. Amy laughed that it might be fun to become Taylor Swift; Jeff said he might want to be LeBron James. They decided to press the button. They forgot the note said “random.”

Their first press swapped them into the bodies of a married couple in Tulsa, who were overweight and empoverished. Neither wanted to stay like that, so they pressed it again the next day, and they both became junkies living in a drug house. They kept pressing it day after day, and they were never in bodies that they enjoyed.

After several months, they were set to press it again, but Jeff stopped Amy. “Don’t do it,” He said, “These are the best bodies we’ve been in for weeks. I’m not sure it’s going to get any better.”

“Do you think I want to be this woman? Or a woman at all? I’ve been nothing but women for the past week! And most of the bodies have been elderly, like 60 or 70. These are the youngest and best bodies we’ve had for some time. If you press it again, the next bodies we end up in could be dead within 24 hours. Don’t press it Amy...Don’t!” Luke, Simone, and I all went to discuss what had just happened. Luke was overjoyed to be alive, even if was in the body of his own 80-year-old grandfather. He didn’t have any memory of an afterlife; it was more like one minute he was in the hospital and the next he was knealing at his own funeral. He quickly concluded that if tried to tell anyone who he really was, they’d probably think he was senile.

Of course, we all also had the more immediate concern of the funeral. Luke’s body was still dead (presumably with his grandfather’s soul now inside of it), and it needed to be laid to rest. I nearly put on my own jacket before Simone handed me her own puffer coat instead. I put it on and we all went next door to the church for the funeral. I realized being Simone was going to take a lot of adjustment for me. It wasn’t going to be easy. 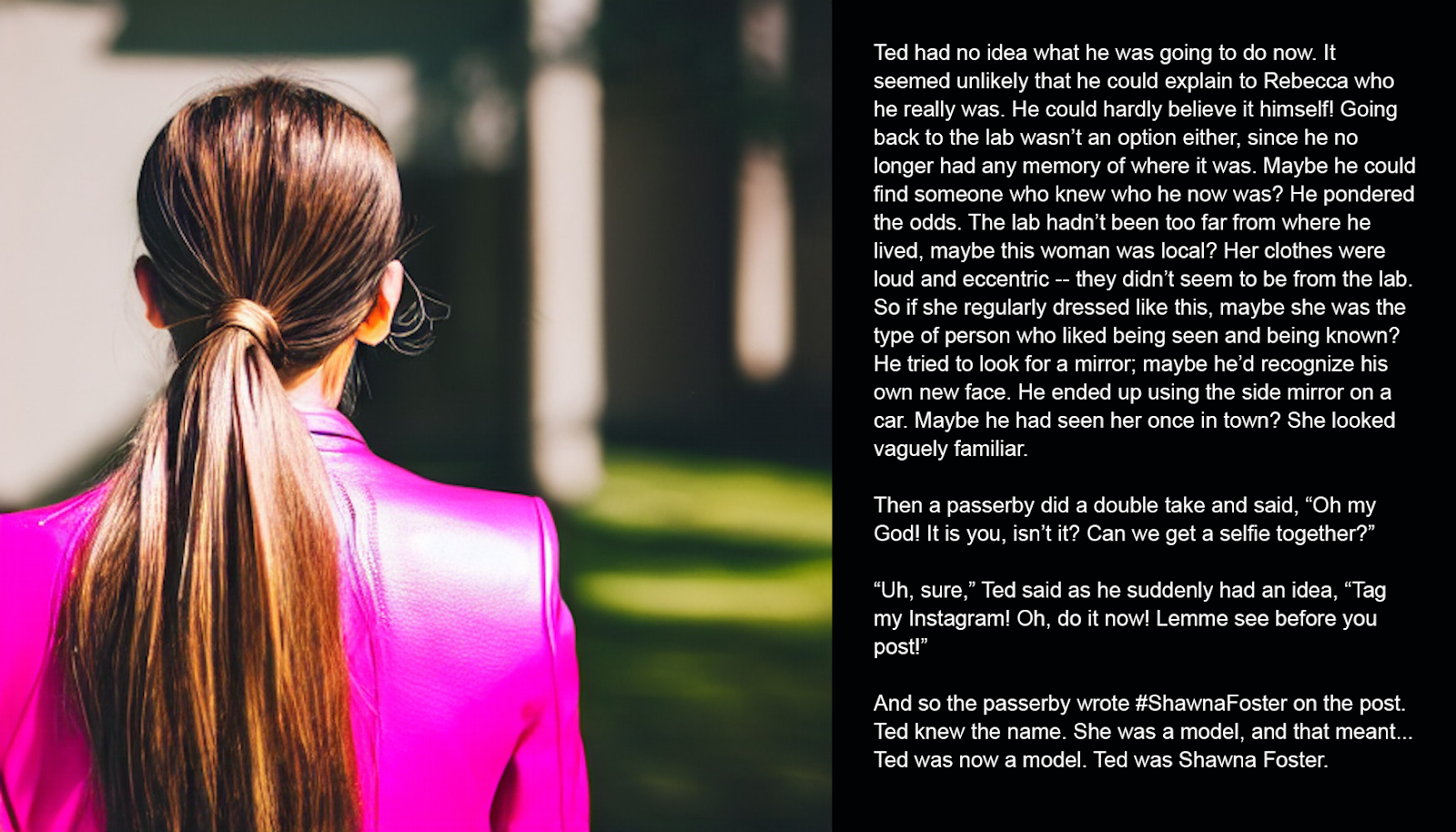 Ted had no idea what he was going to do now. It seemed unlikely that he could explain to Rebecca who he really was. He could hardly believe it himself! Going back to the lab wasn’t an option either, since he no longer had any memory of where it was. Maybe he could find someone who knew who he now was? He pondered the odds. The lab hadn’t been too far from where he lived, maybe this woman was local? Her clothes were loud and eccentric -- they didn’t seem to be from the lab. So if she regularly dressed like this, maybe she was the type of person who liked being seen and being known? He tried to look for a mirror; maybe he’d recognize his own new face. He ended up using the side mirror on a car. Maybe he had seen her once in town? She looked vaguely familiar.

Then a passerby did a double take and said, “Oh my God! It is you, isn’t it? Can we get a selfie together?”

“Uh, sure,” Ted said as he suddenly had an idea, “Tag my Instagram! Oh, do it now! Lemme see before you post!”

And so the passerby wrote #ShawnaFoster on the post. Ted knew the name. She was a model, and that meant... Ted was now a model. Ted was Shawna Foster. 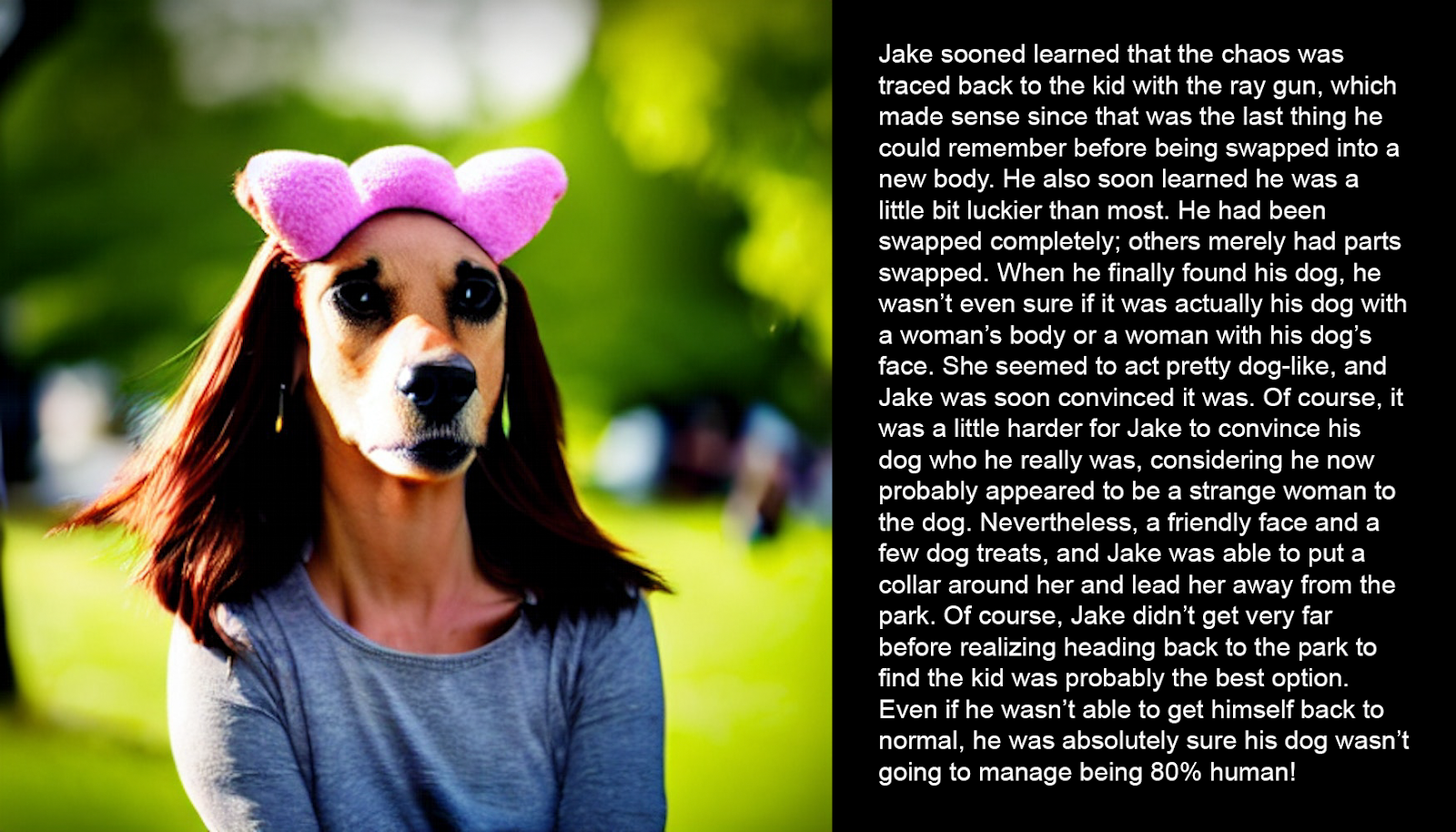 Jake sooned learned that the chaos was traced back to the kid with the ray gun, which made sense since that was the last thing he could remember before being swapped into a new body. He also soon learned he was a little bit luckier than most. He had been swapped completely; others merely had parts swapped. When he finally found his dog, he wasn’t even sure if it was actually his dog with a woman’s body or a woman with his dog’s face. She seemed to act pretty dog-like, and Jake was soon convinced it was. Of course, it was a little harder for Jake to convince his dog who he really was, considering he now probably appeared to be a strange woman to the dog. Nevertheless, a friendly face and a few dog treats, and Jake was able to put a collar around her and lead her away from the park. Of course, Jake didn’t get very far before realizing heading back to the park to find the kid was probably the best option. Even if he wasn’t able to get himself back to normal, he was absolutely sure his dog wasn’t going to manage being 80% human! 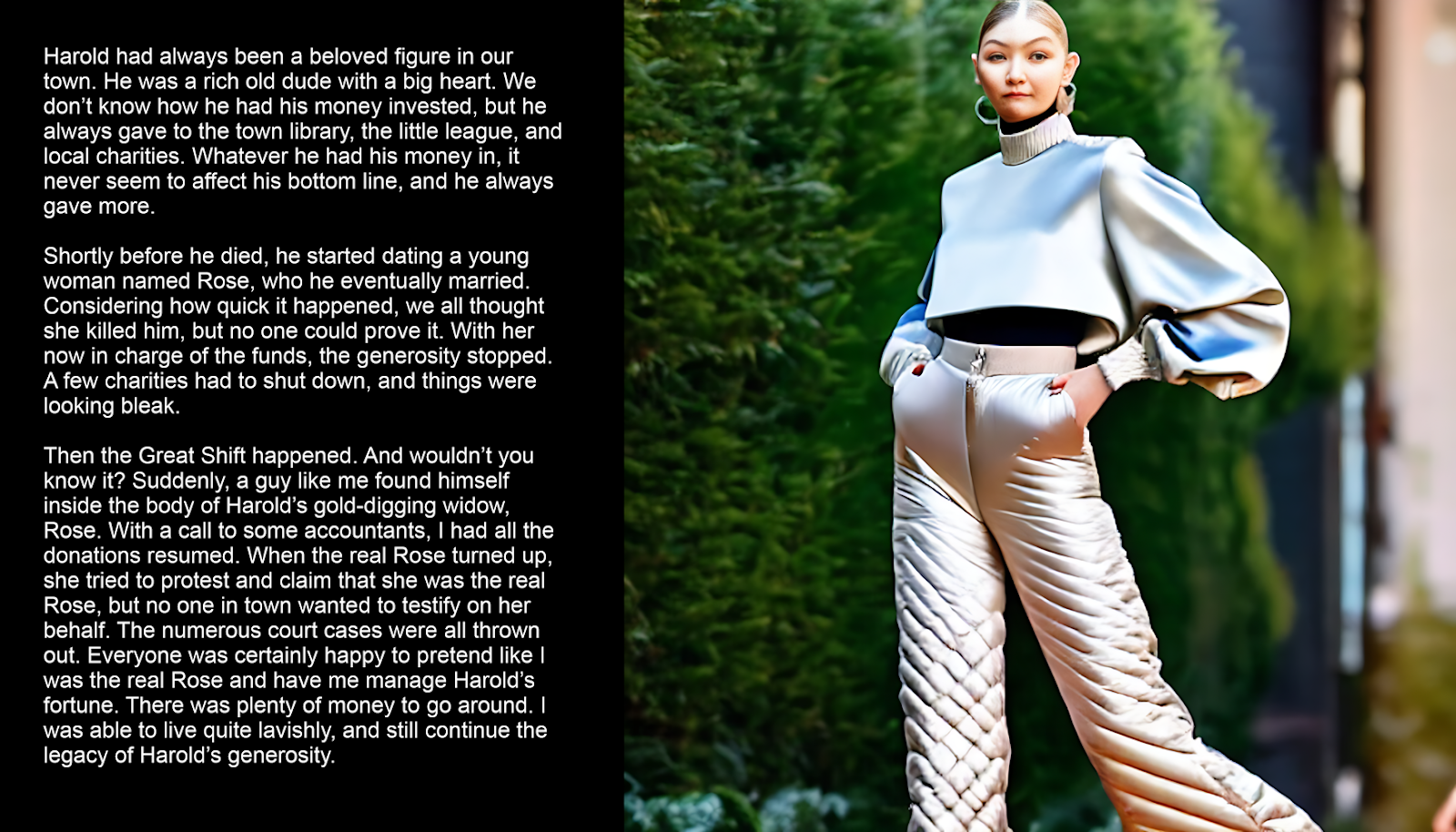 Shortly before he died, he started dating a young woman named Rose, who he eventually married. Considering how quick it happened, we all thought she killed him, but no one could prove it. With her now in charge of the funds, the generosity stopped. A few charities had to shut down, and things were looking bleak.

Then the Great Shift happened. And wouldn’t you know it? Suddenly, a guy like me found himself inside the body of Harold’s gold-digging widow, Rose. With a call to some accountants, I had all the donations resumed. When the real Rose turned up, she tried to protest and claim that she was the real Rose, but no one in town wanted to testify on her behalf. The numerous court cases were all thrown out. Everyone was certainly happy to pretend like I was the real Rose and have me manage Harold’s fortune. There was plenty of money to go around. I was able to live quite lavishly, and still continue the legacy of Harold’s generosity.

Mostly based on this DeviantArt comic by hydroem, which I just absolutely loved. 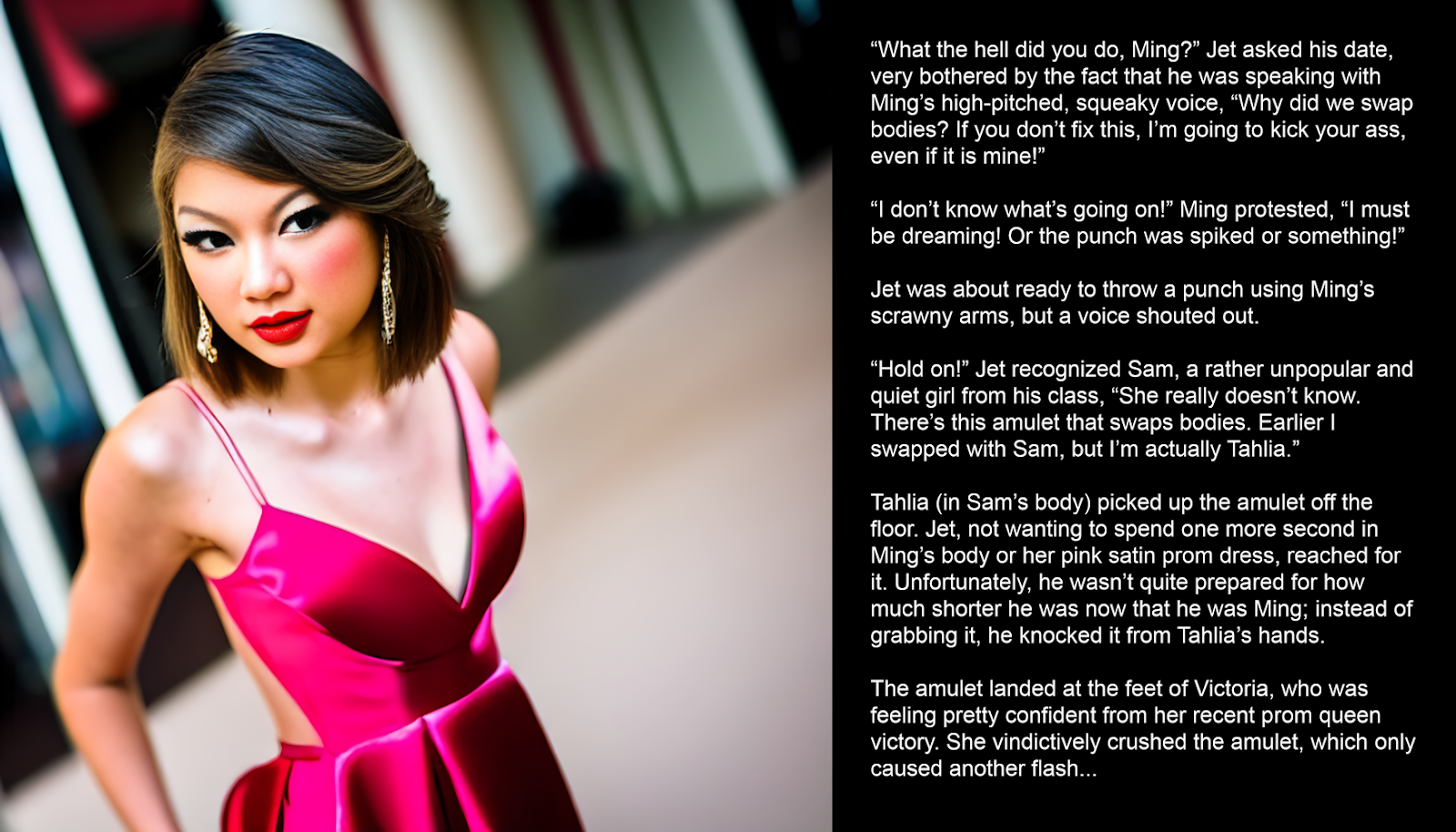 “What the hell did you do, Ming?” Jet asked his date, very bothered by the fact that he was speaking with Ming’s high-pitched, squeaky voice, “Why did we swap bodies? If you don’t fix this, I’m going to kick your ass, even if it is mine!”

“I don’t know what’s going on!” Ming protested, “I must be dreaming! Or the punch was spiked or something!”

Jet was about ready to throw a punch using Ming’s scrawny arms, but a voice shouted out.

“Hold on!” Jet recognized Sam, a rather unpopular and quiet girl from his class, “She really doesn’t know. There’s this amulet that swaps bodies. Earlier I swapped with Sam, but I’m actually Tahlia.”

Tahlia (in Sam’s body) picked up the amulet off the floor. Jet, not wanting to spend one more second in Ming’s body or her pink satin prom dress, reached for it. Unfortunately, he wasn’t quite prepared for how much shorter he was now that he was Ming; instead of grabbing it, he knocked it from Tahlia’s hands.

The amulet landed at the feet of Victoria, who was feeling pretty confident from her recent prom queen victory. She vindictively crushed the amulet, which only caused another flash...

Posted by Alicia at 9:02 PM No comments: I could feel the heat eminating from new demon body, and I could feel the power surging inside. A simple wave of my hand turned the red tint back to a normal soft white. Another wave and I teleported myself across the room. When I rematerialized, I ended up stumbling a little in the heeled boots I wore. They were tough to walk in. I tried to wave them into some sensible sneakers, but it didn’t work. I couldn’t seem to change my body either.

“That’s one of the rules,” the demon now in my body piped in, “I can tell what you’re trying to do, but a demon can’t change herself or another demon with her magic.”.

“I thought I had no restrictions!”.

“Be glad you don’t have to go to hell! Or grant wishes! Or collect souls! You only have to follow the most basic of rules! You can hide your horns, if you want, that’s about it. Honestly, I probably granted your wish in the nicest possible way.”.

“There’s always got to be a twist.”